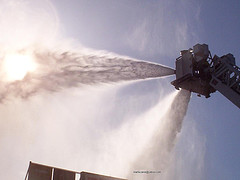 Before we begin, we need some data to analyze. Let’s use the runtime of a backup job as an example. Let’s analyze the last seven runs, looking for meaning. 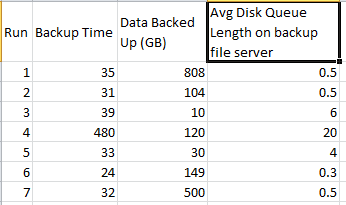 When someone asks, “What’s the average runtime?”, that can mean a few different things. Most people think of the mean, which is the sum of all values, divided by the number of values. In this example, the mean runtime is 96.28 minutes. That’s not very helpful, because most of the runs are far less than that, with only one run being larger. So the mean runtime doesn’t describe the data at all.

The median runtime, however, is 32 minutes. That is very useful because it describes the expected behavior. A median() aggregate is more useful than an avg() for finding middle values when the data is skewed.

Percentile finds the value under which X percent of the numbers lie. For example, the 50th percentile of numbers 1-100 is 50. The 93rd percentile is 93. This is a great statistical measure because it tells us how spread apart our numbers are.

If the covariance is 0, there is no relationship. For example, prices on the stock market don’t have any relationship with how hot your coffee was this morning.

A negative covariance means the two values are inversely related; one rises when the other falls. A great example there is the number of hammock sales in a city compared with its average snowfall. The more snow, the fewer hammocks get sold. 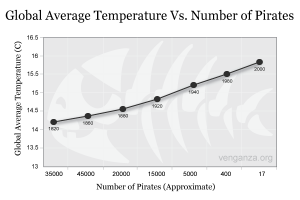 Pirates and Global Temperature have a negative covariance

For anyone in IT or computer science who wants a good grounding in statistics, I would highly recommend Data Analysis with Open Source Tools