Meme Monday: I got 99 problems, but disks ain't one

What are nine (9) problems that I have encountered, that have nothing to do with disks? 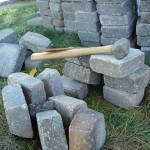 This is one of my banes. I usually hear a combination of, “We’re just making a prototype now, we’ll clean it up later” and “Oh, that’s already working in production, it doesn’t need our attention”. Those two excuses, paired together, hide a magnitude of sins. The result can be a shoddy system design held together using hacks, duct tape, and user workarounds.